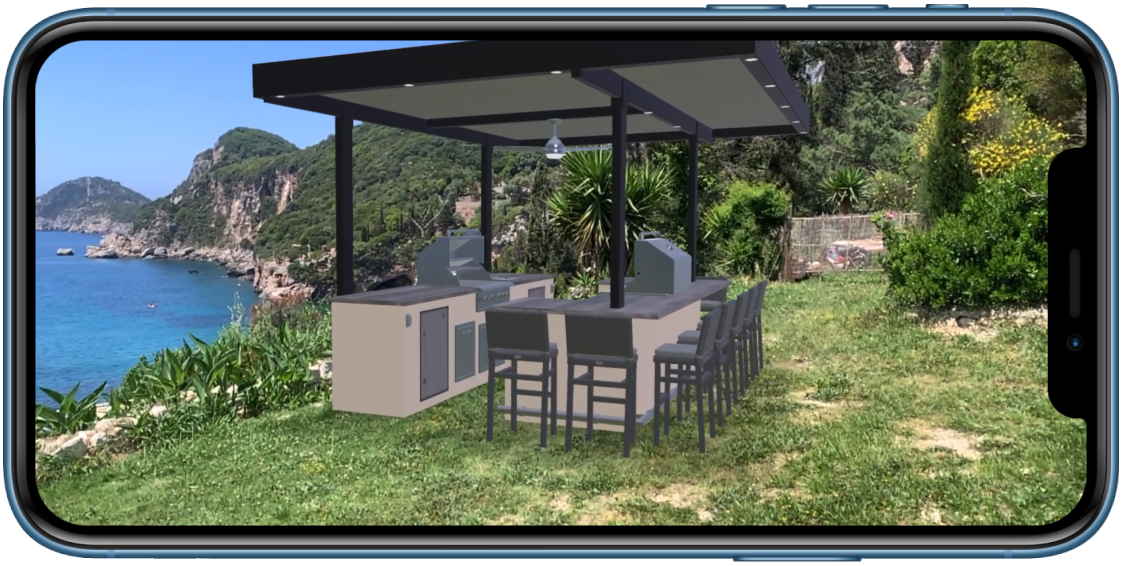 Paradise Grills is America's largest outdoor kitchen manufacturer, which offers the world's strongest built outdoor kitchens, fire features, and Tiki huts with many personalized options. Over a year ago, the company decided to implement a 3d configurator, which would allow customers to adjust the grill islands to their individual needs.

The 3d configurator turned out to be a game-changer. Thanks to it, both showroom sellers and individual customers could design and price any version of the product online in real time. Paradise Grills has thus found a way to effectively show users its product potential, giving them additional value in the form of customization at the same time.

Seeing all its advantages, and most of all its key value, it was also difficult to overlook its weaknesses, among others the poor quality of the visuals or the lack of a mobile version.

The task of improving the configurator was entrusted to the AR-range team, which for several years has been creating tools to support the sale of e-commerce and personalized products, also based on the Sketchfab application, which is used by the Paradise Grills configurator.

We started working on 3d models, mainly by improving the quality of the product view in the configurator. Once again we found out that working with 3d models can be very inspiring. Having a good 3D model opens a whole bunch of new possibilities in terms of content creation. Spontaneously, within a few minutes, we have prepared one of the products to be displayed in Augmented Reality.

We showed the Paradise Grills team their AR product as a curiosity and a potential solution for future use. As it turned out, we underestimated its potential.

Permanent changes in consumer behavior caused by the pandemic, in terms of purchasing processes and spending free time, influenced the need to develop new tools to facilitate the purchase decision. Paradise Grills sells its products in their  showroom network and through the online channel with the help of the 3d configurator. However, seeing a product in the physical shop or on a computer screen is not the same as seeing and trying products out in your backyard or patio (especially such large-sized ones).

Our client realized that allowing the customers to preview their grill islands in the place where they are supposed to end up is the missing link in the entire sales pipeline. When viewing AR models, the user can easily visualize the real 3d product using his phone and evaluate its dimensions and details from all angles. In this way (unexpectedly quickly) we got the task of implementing the AR function in the 3D configurator. We were pleased with this challenge because we could leverage our experience and continue to spread the idea of using AR in e-commerce.

Then we ran into a problem. Sketchfab, a 3D platform on which the configurator works, allows you to create web AR, but only for a single model. Our client needed AR for all possible product variants as given in the configurator (way beyond 100.000 possible configurations)

Only the second option was justified in our opinion. After a few attempts and throwing a few concepts into the garbage, the AR-range team created and put on the server a 3d application that, using our proprietary scripts, recreated what the user does in the configurator. API saves the variant selected by the user as a 3d file and automatically generates the appropriate AR file formats for iOS and Android devices.

In order to facilitate and encourage consumers to use AR, we have programmed a widget that, when clicked, generates a QR code for the current configuration. Immediately after scanning the code with the phone, the user is presented with the product of his choice in AR.  Paradise Grills also reported the need to display products in AR on a smaller scale, so that AR models can also be viewed in the office or home. So we added the functionality of seeing AR in 2 ways, the first on the scale of 1: 1 and the second on the scale of 1:10. The 1:10 scale resembles architectural models that can be displayed, for example, on a table and conveniently viewed from each angle.

When preparing the AR function for Paradise Grills, we did not know that we would develop a solution that no other certified partner of Sketchfab, the world's largest platform belonging to Epic Games, has yet managed to achieve. Sketchfab developers, with whom we work on various projects, were amazed seeing our solution.

The AR functionality was very enthusiastically received by both Paradise Grills customers and the sales team. It helped to distance the competition. Despite technological barriers, adding AR was a logical consequence in developing sales right after creating the 3d configurator.

The 3D configurator with AR function is now the primary sales tool of Paradise Grills.

In the IT and Development world, it is hard to find someone who truly possesses all of the following items. 1. Knows what they are doing. 2. Is easy to work with. 3. Isn't lazy or complaining about requests. Marcin and his team were all 3 of these things. I have now worked with Marcin for over a year on an ongoing 3D/AR Megaproject and he is the best part of working on the complex project. I 100000000% endorse him and his staff. - Jason Ross from Paradise Grills:

Drive new sales with 3D & AR visualisation for the web
with Augmented Reality widget on your website!